HOUSTON — A mural on the wall of an elementary school here proclaimed, “All the world is all of us,” but the hundreds of people packing the auditorium one night were determined to stop a low-income housing project from coming to their upscale neighborhood.

The proposed 233-unit building, which was to be funded with federal tax credits, would burden their already overcrowded elementary school with new children, many people argued during a lively meeting last year. Some urged the Houston Housing Authority to pursue cheaper sites elsewhere.

As cheers rang out over nearly three hours for every objection raised, Chrishelle Palay, a fair-housing advocate, confronted the mostly white crowd.

“It’s time to face your fears,” Ms. Palay said as boos rang out. “Stop succumbing to misleading rhetoric, and begin practicing the inclusive lifestyles that many of you claim to lead.”

The outcome was familiar. Elected officials sided with the opposition. And an effort to bring affordable housing to an affluent, majority white neighborhood failed in Houston, where low-income housing is overwhelmingly confined to poor, predominantly black and Latino communities. 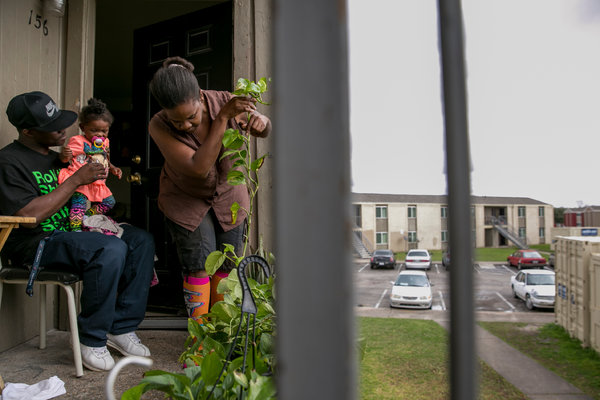 Erica Ashton with her brother-in-law, James Smith, and his daughter, Jamie, at the low-income Garden City Apartments in Houston. Ms. Ashton said she had no interest in moving to the Galleria district.
ILANA PANICH-LINSMAN FOR THE NEW YORK TIMES

A review of federal data by The New York Times found that in the United States’ biggest metropolitan areas, low-income housing projects that use federal tax credits — the nation’s biggest source of funding for affordable housing — are disproportionately built in majority nonwhite communities.

What this means, fair-housing advocates say, is that the government is essentially helping to maintain entrenched racial divides, even though federal law requires government agencies to promote integration.

The nearly $8-billion-a-year tax credit program allows private developers to apply for credits they can use to help finance new housing or the rehabilitation of existing units.

The program offers developers larger credits for building in poorer communities, which tend to need affordable housing the most but also have large minority populations. That has meant that even in a place like Houston, one of the country’s most diverse cities, racial divides can run deep.

When she got a federal housing voucher many years ago, Tonya McKinney said, she searched far and wide for an apartment but ended up in Houston’s Fifth Ward, a neighborhood she was not happy with. Founded by former slaves, the community, just east of downtown, has a long history of blight but has undergone significant redevelopment in recent years.

“They talk about this all the time, about us moving into a better area,” said Ms. McKinney, 46, who used to work in retail but is now disabled. “They’re actually tired of living in what they call the ghetto.”

The proposed Houston housing, known as the Fountain View Drive project, would be built in the Galleria district, which sits a few miles west of downtown and features shiny office towers and stores. And at 87 percent white, it is an unlikely site for low-income tax-credit housing.

While only about a third of census tracts in the nation’s hundred largest metropolitan areas have a majority nonwhite population, 54 percent of new tax-credit projects have been built in those tracts since 2000, according to a Times analysis. And that pattern of placing tax-credit projects in communities with disproportionately high black and Latino populations has been consistent over time, the data shows.

The Treasury Department, which administers the program, includes no provisions in its regulations that address segregation. That, fair-housing advocates argue, runs afoul of the Fair Housing Act, which requires government agencies that administer housing programs to do so in a way that reduces racial segregation.

“It’s been clear for a long time that the tax-credit program is perpetuating racial segregation,” said Michael Daniel, a fair-housing lawyer.

While nearly 58 percent of the people living in all tax-credit properties in Houston are black, the area proposed for the housing development is just 3 percent black.

At the meeting last year, Galleria residents complained mostly of school overcrowding, the effect on their property values and the cost of the project. Yet some people hinted at deeper social discomforts.

One man, Richard Caldwell, stepped to the microphone and described a low-income area in Oxnard, Calif., where he had lived previously. The families there, he said, jammed a lot of people into the apartments by subletting rooms.

“They’re going to sublet it out, and you won’t have any control over it,” he said. 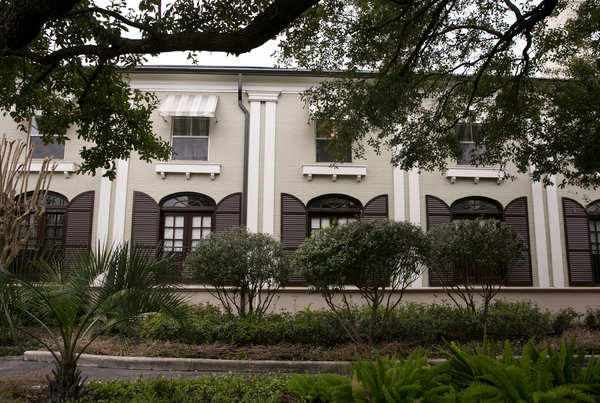 An apartment complex in the Galleria, an upscale, majority white neighborhood.
ILANA PANICH-LINSMAN FOR THE NEW YORK TIMES

In a letter to the federal Department of Housing and Urban Development, one Galleria resident warned that the development would introduce an “unwelcome resident who, due to poverty and lack of education, will bring the threat of crime, drugs and prostitution to the neighborhood.”

She had made it to the neighborhood, she wrote, through the hard work and sacrifice of her family.

“I will fight very hard,” she continued, “before I give up that privilege and dignity to those who, either from lack of initiative or misfortune, don’t deserve to be there.”

Mayor Sylvester Turner, who is black and in his first term, vehemently opposed the project and decided not to put it before the City Council for a vote. His opposition was mostly due to the cost, he said, but he acknowledged that race may have motivated other critics.

“I know for a fact that there were some who did not want it because they did not want, quote-unquote, those people coming over there,” he said. “I got that. But that is their right to exercise their freedom of speech, even though I fundamentally disagree.”

Greg Travis, the city councilman representing the area, said race was not a concern in the community, where about 29 percent of the elementary students are Latino and 7 percent are black. Rather, for some residents it was about how low-income neighbors might fit in, he said.

“You go to certain places, their houses would be painted,” he continued. “Others, they can’t afford that as much, so you don’t see it as often. It’s not a bad thing, it’s just a socioeconomic thing.”

Several United States senators reintroduced a bipartisan bill this year that would greatly increase funding for the tax-credit program and prohibit community members from vetoing projects.

“One of the biggest obstacles that has always existed and that remains in building affordable housing in higher-income, higher-opportunity neighborhoods is local opposition,” said Diane Yentel, the president and chief executive of the National Low Income Housing Coalition.

Although the Treasury Department administers low-income housing tax credits, each state is left to decide which projects are funded. Ever since Texas made changes to its selection process four years ago, projects have increasingly gone into neighborhoods that are whiter and more affluent, according to a study by the Texas Low Income Housing Information Service, the fair-housing group that Ms. Palay works for.

Whether that is what’s best for low-income families is at the center of a dispute between Houston and the Department of Housing and Urban Development, which is the government’s chief enforcer of fair-housing laws.

In January, in the waning days of the Obama presidency, the department sent a scathing letter to Houston, saying that the opposition to the Fountain View project was partly motivated by race. The department had found that 81 percent of tax-credit developments in Houston were in census tracts where eight in 10 people are minorities. HUD threatened to take the city to court if it did not approve the development.

“I don’t think the right message to be sending to kids in low-income families is that the only way they can succeed is that they have to move into affluent communities to do that,” he said.

Instead, Mr. Turner has strongly advocated investing in black and Latino communities that lack resources, saying new housing could be one tool to help improve them.

“But this is the same thing we have been hearing for years, if not decades,” said Gustavo Velasquez, a former assistant HUD secretary who worked on the Houston investigation.

Mr. Velasquez described telling Mr. Turner in a meeting that Fountain View represented a balanced approach to developing affordable housing in both poor and affluent areas.

“This was the opportunity for the city to take that bold step and start reversing Houston’s legacy of segregation,” he said.

Research suggests that when children from low-income households grow up in affluent communities, they tend to get a better education and earn more money as adults. But a study published last year by two Stanford professors made a case for building tax-credit housing in high-poverty areas, finding that home values around the developments rose by about 6.5 percent and that segregation decreased modestly.

Ben Carson, the secretary of housing and urban development, declined to comment on the Houston project, but he has publicly stressed the importance of investing in low-income communities and questioned government-driven efforts to promote integration.

“The secretary strongly believes that all cities should provide the opportunity for their residents to have a diverse range of housing options,” Raphael Williams, a HUD spokesman, said in a statement.

He added that the department was still contemplating what to do about the Fountain View project. The city has asked HUD to withdraw its complaint, and the fate of the project hinges on whether the department complies or tries to force Houston to allow it to be built.

One Houston resident, Katrina Rhodes, wants the development to be built. As she sat in her second-floor apartment one afternoon, holding her 21-month-old daughter, Chassity, Ms. Rhodes had fresh worries about her 9-year-old daughter, Leeah. 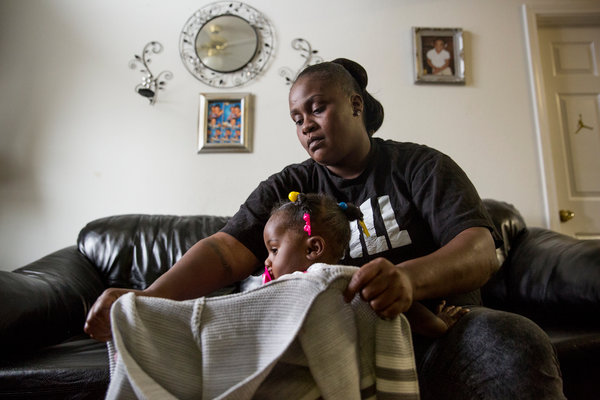 Katrina Rhodes with her daughter Chassity. She hopes the Galleria development is built. “If there was an opportunity for me to move over there, guess what: I would go,” she said.
ILANA PANICH-LINSMAN FOR THE NEW YORK TIMES

Just a day earlier, Leeah, who walks more than a mile to and from school every day because school buses do not come out that way, was chased home by fourth graders in a dispute over someone being sprayed with Silly String, Ms. Rhodes said. Without any extracurricular activities at the school, Ms. Rhodes, 31, worries about what will keep her children busy.

She wants a neighborhood like the Galleria, where, she believes, the schools are better and they will have the best chance to succeed.

“If there was an opportunity for me to move over there, guess what: I would go,” she said.

Not everyone thinks it would be a good idea to move.

“No,” Erica Ashton, 38, said of whether she would move to the Galleria from her spartan, low-income apartment complex in a predominantly black part of northwest Houston. She was worried about the discrimination she might face.

Her brother-in-law, James Smith, wondered if integration could even work as he bounced his 15-month-old daughter, Jamie, on his lap. If black people moved into the Galleria, white people would flee, he said, adding that it would be more instinctive than intentional.

This entry was posted on 2017/07/03 by Roberto Moris in Ciudades, Políticas, Tendencias.